It's true. I love Coca Cola. I find it to be delicious and if it wouldn't make me weigh 300 pounds and rot my teeth in no time, I could easily drink a gallon or so per day.

I usually settle for Diet Coke, because I don't like it nearly as much, so I don't want to keep drinking it.

Coke is great in the Pacific Northwest, but there's something about Coke that's bottled in Atlanta, home of the Coca Cola Headquarters, that is just... special. It tastes different, like liquid gold. In fact, all Coke bottled on the East coast seems to taste better - it's somewhat spicier, if that makes sense.

I'm fortunate to work at the corporate headquarters for an awesome company, with four other offices across the country - one happens to be in Atlanta. ATLANTA - HOME TO COCA COLA! Our Atlanta office is a mere 11 miles from the World of Coca Cola, which is pretty much a giant Coke museum. I need to make a pilgrimage, sooner, rather than later.

So here I am, all the way across the country, in the Pacific Northwest, land of mediocre Coca Cola - but lucky for me I have an AMAZING coworker who travels to our Portland office quite frequently. There are no words to describe my excitement when I returned to my desk earlier today and found this: 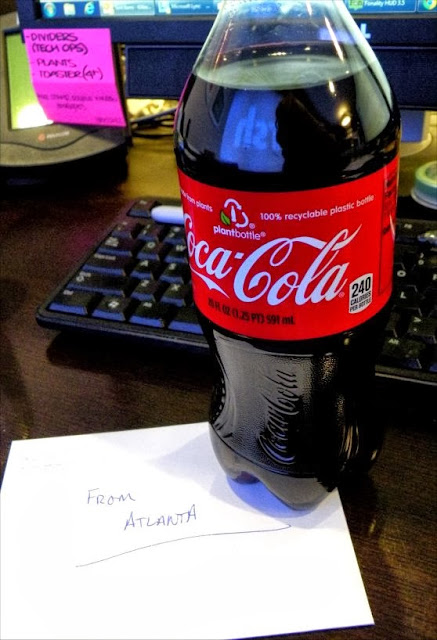 Yep - that's a delicious REAL Coke from Atlanta. It looks like Christmas came in October this year.

Email ThisBlogThis!Share to TwitterShare to FacebookShare to Pinterest
Location: Portland, OR, USA