My friend Morgan is currently in Mexico, and I've agreed to care for her cat while she's away. His name is Dave, and even though he's a cat, he's pretty great. Like a dog with sharp claws and a sandpaper tongue. 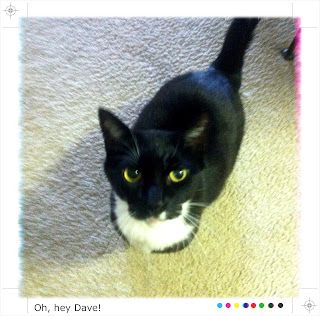 ﻿
I go check on Dave/feed/water/give his medicine/clean his litter box every day during my lunch break. I work downtown, Morgan lives in Chinatown. Her place is only 8 blocks from my office, but it may as well be in.. China, as I honestly haven't been anywhere in her neighborhood other than her building. So lunchtime is an adventure.
On the way to take care of Dave today I ducked into Bowery Bagels (excellent moment to walk by, it started raining just as I got to the door).
I walked in and followed the instructions on the sign (it read to form a line next to this half empty shelving unit.. which was a bit confusing, it looked like storage rather than items for sale because it was so empty)

I waited patiently to be helped, in the designated area. There were three employees working - one employee was speaking with two gentleman at the counter about hot chocolate, the other two employees were doing bagel making things. After waiting about 3 minutes (which seems like a lifetime when you're standing in an almost empty bagel shop), a woman walked in off the street, walked right past me, and one of the employees  behind the counter immediately asked her what she would like to order. I thought maybe they hadn't seen me - the only customer waiting to be helped. I politely listened as the rude woman who cut in front of me ordered a cup of hot water, and nothing more. After she was helped, the employees behind the counter went back to their tasks. Clearly I was wearing a cloak of invisibility! I finally was able to get the attention of someone behind the counter, and ordered a garlic & herb bagel, toasted, with plain schmear. I had thought about ordering one of their bagel sandwiches, but after the poor customer service I had second thoughts about shelling out $8 for a sandwich at a bagel shop.
After I ordered the bagel I stood behind the two gentleman still talking about hot chocolate with the employee at the register (one had ordered hot chocolate, the other had ordered a cup of hot water - I don't know what it is about the water here - maybe it has magic properties). When it was my turn at the register the employee just stared at me. She.Didn't.Say.A.Word. After an awkward pause she asked if she could take my order. I let her know that I had already been helped and told her what I had ordered. By the time my debit card transaction was complete, my toasted bagel was ready and was placed on the counter by the employee who had taken my order.
I grabbed a seat at the counter facing NW Broadway and pulled my bagel out of the white paper sack it came in. There was a large black smear on the side of the sack, which I assume was an attempt to stamp "Bowery Bagels" on the paper, but it was poorly executed.
My initial, pre-taste impression of the bagel is that it was small, but I liked that it had a cornstarch dusting on the bottom. I quite enjoy texture in my food, and cornstarch adds an interesting crunch to just about anything. I also appreciated that cream cheese was applied to both sides of the bagel, this seems like common sense to me, but I have to ask for it to be applied like this at many bagel shops.
The bagel was okay, it was nothing special. It was very "bready", and didn't have that "chew" that a really great bagel has. It was toasted perfectly and had a great bagel-to-cream-cheese ratio, but that wasn't enough to make this a stand out in my opinion. The complete lack of customer was a huge turn off. If they had been friendlier/had paid attention to me at all, the bagel may have tasted better. It's funny how that works.
I can't see myself making a special trip to return to Bowery Bagels, but I'd definitely return if I was with someone who wanted to check them out. I order a LOT of bagels for my office. I've been getting them from Rescue Bagels due to the excellent customer service, friendly employees, and proximity to my office, but I may give Bowery Bagels a try when I have to pick up another dozen bagels next Monday.
I ate - Garlic & Herb bagel w/regular schmear, $2.50
If you'd like to check out Bowery Bagels for yourself, they're located at 310 NW Broadway in Portland and are open from 7:00am - 2:00pm seven days per week.